A special reception was held in honor of two artists who happened to be visiting Los Angeles at the same time. Dr. George Sawa who is based in Toronto, Canada, was invited to give several lectures at UCLA on the subject of Arabic Music in the Medieval era and the role of the Arab music theoretician and historian, Al-Farabi. In addition, Ms. Zein Al-Jundi, a Syrian-American singer who is based in Austin, Texas was also visiting. Zein is an architect with interest in world music and classical Arabic singing.

On Saturday 27 Feb, Sami Asmar, in collaboration with TURATH Organization and Arab Arts Network held a reception for both Dr. George Sawa and Ms. Zein Al-Jundi. Many artists from the local community were invited to meet the visiting artists. Dr. Sawa gave a brief lecture and then he performed on the qanun and accompanied Zein in her singing of traditional Arab songs for nearly two hours. Prof. Jihad Racy of ULCA performed on the nay as well. The feedback was overwhelmingly positive. The participants congratulated the visitors and organizers and looked forward to more events of the type.

Dr. George Sawa is from Alexandria, Egypt. He is a medieval historian of Arab music, specializing in the writing of Al-Farabi and Al-Asfahani. He is also a virtuoso qanun player and teacher. He is well published and in demand in the lecture series in the field of ethnomusicology. 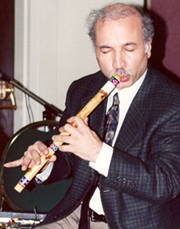 Zein Al-Jundi was a child star singer in native Syria. She moved to the US and studied and practiced architecture. She hosts a weekly radio show in Austin on world music. She has returned to singing after the Arab Music Retreat in August 1998, where she met Simon Shaheen, George Sawa, Jihad Racy, and Sami Asmar, and the idea for future collaboration was born.