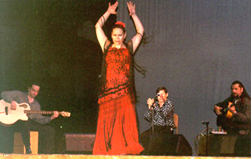 The exciting second half of the concert combined the two ensembles in an unusual simultaneous performance in both Arabic and Spanish in complete harmony. The large crowd was moved to their feet demanding encores. The segment was comprised of a series of melodic and rhythmic improvisations and dance deriving elements from both Arab and Spanish Flamenco repertoires and blending a wide variety of instrumental timbres and compositional techniques. This section highlighted the spontaneous creativity characteristic of both traditions. The fusion illustrated the stylistic elements shared by the two cultures as well as the unique artistry of the featured performers.

Andalucia is in the southern part of Spain, the region where Flamenco was born. Although Spain has many different types of folk dance and music, Flamenco is typical to Andalucia only. Under the long rule of the Arabs, a style of music and poetry prospered to form a basis for classical music of the Arabs. Andalucia was characterized by multi-cultural arts through the mixing of the Christian, Hebrew, Muslim, and Spanish Gypsy cultures. During seven hundred years of Arab rule, Andalucia became a center of learning and arts absorbing the influence of the divergent cultures of the dominant Spanish population with Arabs, Jews, and Gypsies. A vibrant musical heritage developed and, to this day, forms of classical Arab music reflect this legacy. Flamenco comes from this same mix of influences, and combines music and dance in support of a body of songs known as "cantes". This concert brought both traditions together in a unmatched musicalexperience.

The event was co-sponsored by the Lila Wallace Reader's Digest Fund and the Department of Ethnomusicology at UCLA, and was supported by "Turath.Org" and the Arab Community Center for Economic and Social Services (ACCESS).  The Arab Arts Network is a national grouping of artists and art enthusiasts aiming to promote Arab arts and create new audiences in the United States.